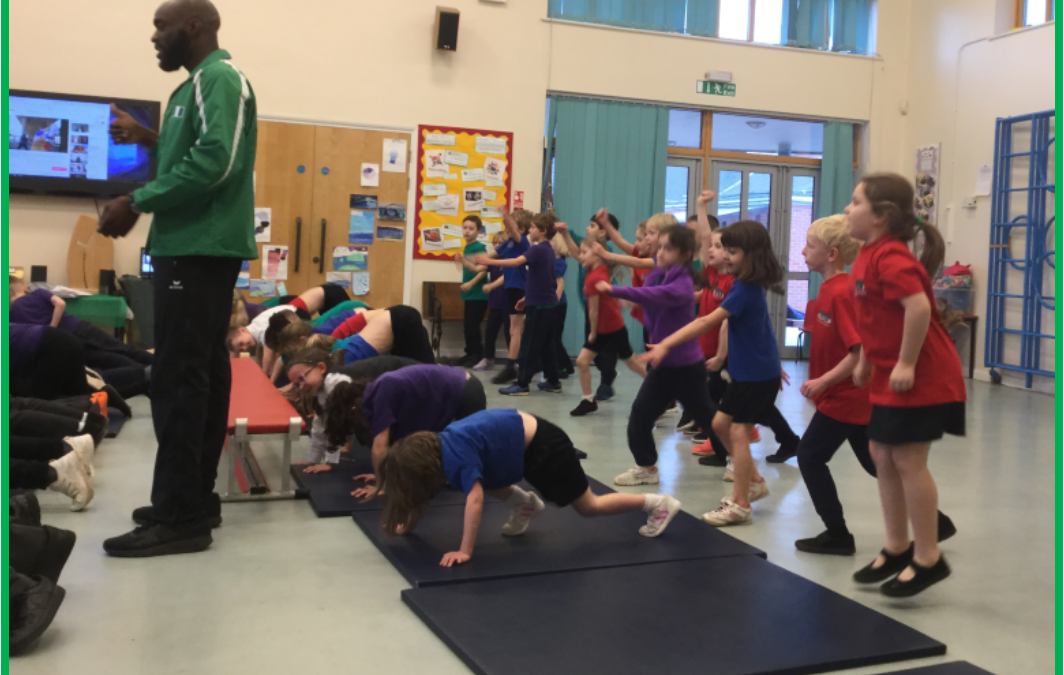 We certainly made huge strides towards of goal of being active on Tuesday afternoon when Ezekiel Ewolu put us through our paces. ‘Zeks’ as he asked us to call him was a real inspiration. He talked to us about how he was mainly interested in playing football at school and had a try out at Charlton Athletic but then a sports coach who had obviously spotted his talent suggested he had a go at long jumping. Zeks told us that he loved the freedom he felt when flying through the air so much that he was determined to become a champion in this sport. In his career he has been part of the Great British Team but he hopes to qualify to be part of the Nigerian Team at the next Olympic Games. He knows he has to work hard and keep

practising if he is to reach the qualifying distance of 8 m 10 cm. His current best jump is 7 m 90 cm so he only has 20 cm to go. The children asked some great questions—Matthew’s opener was “Do you have a six pack?” but others asked about his previous experience, his training and his diet. The children all took part in their sponsored activities which left them completely out of breath and very tired. Some members of staff tried to join in but quickly realised how long a minute is when you are doing ‘Star Jumps’ or ‘Spotty Dogs’!

During our assembly Zek persuaded some children and some members of staff to try a standing long jump. Mr Ray and Mrs Bennie did a fabulous job, as did the children, but they were all well and truly shown up when Zek launched himself high in the air and flew across the hall. We really enjoyed this visit and between us raised over £800 some of which will go to our PSA and the rest of which will be used to support a range of athletes with their training.