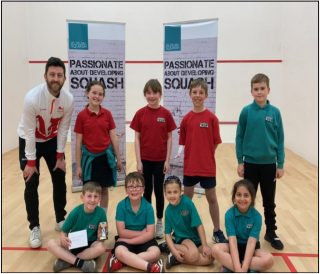 Over the past month, four children from Year 3 and four from Year 4 have been taking part in the Roman Cup Squash competition held at The Garrison in Colchester. This was the first time that Bures has taken part.

Over 140 children from different schools participate. Our children did an excellent job with their skills and confidence growing each time they played. Year 3 came third in the Silver group and Year 4 fifth in their Silver group.

Well done Amillie, Neave, Isaac, Finley, Chloe, Rose, Frank and Lewis. A particular mention should go to Lewis who won the Most Improved Year 3 boy at the tournament. I know that the organisers were very impressed with the whole team. Thank you to Mrs Baker and Mrs Miller for helping with transport.